Reelight Pro is a tape saturation plugin with many features for getting an authentic tape vibe and also some of the desirable artifacts associated with tape.

The plugin authentically emulates tape saturation/compression, overall sound, and vibe. We bring you 6 tape machines at 2 speeds and various levels of sampling and modeling to get the most authentic sound possible to date!

The invention of digital audio recordings liberated sound engineers in many ways which were not possible in the analog era. Even with all the tools at one’s fingertips, musicians and engineers sorely missed the sound and sonics of earlier recordings.

The magic that the recording mediums imparted by default and one which we all took for granted.

Reelight Pro is a plugin designed to bring back the authentic tape sounds of not one, but 6 different sought-after Tape Machines at different speeds and levels to bring us even closer to the “reel” sound of tape.

With this plugin, you also get access to desirable parameters such as tape speed, bias, input saturation, crosstalk, and even the compression imparted by tape as separate controls! The plugin comes with a lot of presets designed to help to get you started, or design your own from scratch!

Advanced Dynamic IR (Impulse Response) systems that we have developed in addition to DSP modeling, help us achieve the authentic sound of tape machines like never before.

Hysteresis Processing along with a great sounding resolver, help us achieve the “wow” factor!

The Input Gain sets levels from -24dB to +24dB with 0 dB in the center, This control acts in the same way as on analog tape recorders, the more gain you increasing, the harder the tape is hit with sound, and create the correct response audible in terms of saturation and compression.

The Lock feature lets a user increase input gain with an automatic gain compensation for an increase in levels in the output.

The Output Gain sets output levels from -24dB to +24dB with 0 dB in the center,

This plugin features a set of 12 dB/ oct (20Hz to 20 kHz)High Pass and Low Pass Filters using an analog design scheme for a natural sound. These are Pre-Filters, and affect the sound before the tape algorithms.

SPEED:  Select Slow or Fast speeds offered per tape machine.. these vary from 3 1/2 ips to 30 ips depending on the machine selected.

BIAS: This control lets you adjust the Bias of the machine selected and creates a desirable saturation effect in addition to Input Gain Saturation.

COMP: This controls the envelope of the sound like a compressor, allowing the user to emulate the “compression” characteristics of tape. The effect is subtle but noticeable.

CROSSTALK: An artifact of multitrack tape machines was “Tape Bleed” or signal bleed, whereas the signal on adjacent tracks also record additionally on each other.. creates a mono-spatial effect. You can adjust the amount desired for this parameter.

We have the option of 2x-8x oversampling, depending on your cpu power and computer resources, this helps “smooth” the sound and sound even closer to the analog bandwidth. 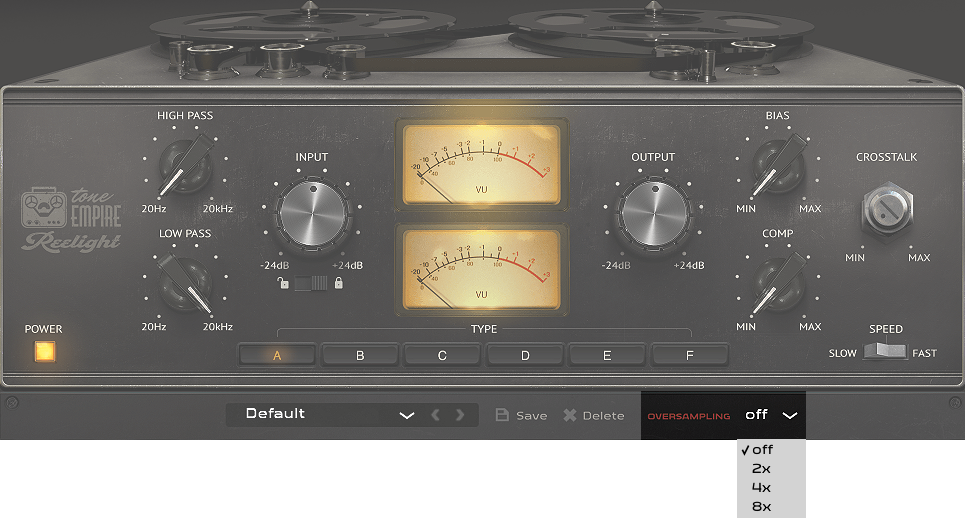 Note: Please reduce the volumes on your speakers or headphones while making adjustments to the plugin parameters or selecting machines and tape speeds. Since this is an IR-based system, there may be “pop” sounds when the Dsp switches samples.

Note (A)
1. SOME ANTI-VIRUS SOFTWARE MIGHT BE ALERT WHILE INSTALLING/DOWNLOADING THE FILES, KINDLY IGNORE THOSE WARNINGS. Those are False positives. We have tested it on Norton Anti-Virus, and the Installers are clean. 2. FL Studio users may experience the crashing of DAW while using Oversampling feature.

When you open the product for the first time it will open in trial mode. It will ask you for your authorization code ( You only need to do this once for the product ). You can continue in trial mode by selecting ” Demo: from the Top bar.

To make the plugin work again, Please click the “Get Serial” button on the registration window. This will take you to the product page on our Tone Empire website, Where you may purchase the full version of the plugin.